“We didn’t leave an impact, like you damn Jeepers do”: Grand County Escalates Fight in Labyrinth Rims and Gemini Bridges Travel Management Area 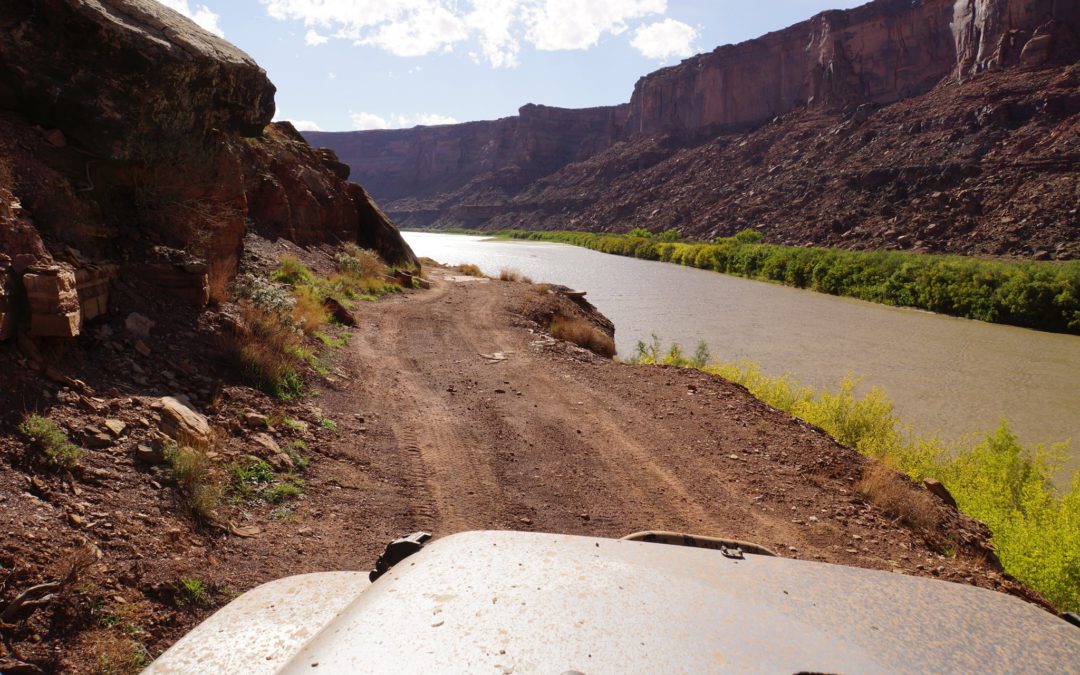 Last week, the Grand County Commission in Utah debated a letter they sent to the Bureau of Land Management for their official comment on the Gemini Bridges/Labyrinth Rims Travel Management Area. This is one of the planning efforts we are watching closely as part of the 10,000+ Project.

In September we learned through document requests that BLM was developing an alternative for this area that would close many of the world-famous off-roading trails in this area northwest of Moab, and we shared our findings to educate the public about what was at risk.

For reference, here is a comparison of maps for two alternatives the BLM is considering:

We’ve been working with the off-road and recreation communities to ground truth the condition of the trails in this area, so that when the next round of public comment is open we can mobilize everyone to make a strong case to keep this area open. We still plan to do this.

The planning process allows state agencies and county governments to participate as coordinating agencies, which allows them to inform BLM planning processes in between the rounds of public comment. This is the comment that the Grand County Commission drafted:

As you can see from the final pages of the letter, the Grand County Commission is proposing to close dozens more routes than even the anti-access wilderness alternative. Specifically they urge closing all of the Dead Cow motorcycle loop, Hey Joe Mine, Day Canyon Point, Rusty Nail, and Gold Bar Rim / Golden Spike (although they recommend Gold Bar Rim / Golden Spike would still be open to full-size vehicles).

This is the map that Grand County is proposing (new proposed closures are marked in purple and green):

We attended the meeting, and based on what we observed, advocates for motorized use made a strong reasonable case that these historic, popular, world-renowned routes should be left open for everyone to use. These comments were contrasted by individuals who believe that only their preferred form of recreation should be given preference in this plan. We have clipped one of these comments from the meeting to illustrate the unhinged, irrational angst that is motivating force for Grand County’s actions:

We agree with the key points made that recognize that user conflict is an often exaggerated and entirely subjective consideration for justifying closures, yet Grand County claims they are recommending these closures to reduce user conflict. We also agree that the creation of buffer zones around roads isn’t appropriate at the travel planning level, and is something that was already addressed and rejected in the Moab Field Office Resource Management Plan.

Ultimately, Grand County agreed with the unhinged individual who said motorized recreation shouldn’t even have a seat at the table and voted unanimously to adopt the language of the letter being debated and send it to the BLM.

We expected this to be the outcome. It is unfortunate. You always hope that elected officials will make enlightened decisions based on reasoned arguments, the confines of the law, and the need to make public benefits equally available to all members of the public. It has been our experience that elected leaders in Grand County have a different set of priorities and will usually vote in favor of policies that are dogmatic and discriminatory as long as they can justify their vote by pointing to a handful of complaints from pathologically disgruntled constituents.

Napolean Bonaparte famously said, “Never interrupt your enemy when he is making a mistake.” While we don’t like to label anyone as an “enemy,” Grand County has adversarially positioned themselves against those who want to access the valuable recreation experiences available on the federally managed public land in their county. When we read the letter the Grand County Commission unanimously adopted, we found several critical flaws with their letter. A coordinating agency in a travel planning process has the potential to carry a lot of weight with the BLM. If Grand County were able to use their coordinating agency status effectively, they would be able to make a strong case to the BLM to close a lot of the roads in this plan. Because they adopted the letter above, they’ve chosen a path that is ultimately going to make them irrelevant in the process.

Coordinating agency status is privileged access to the planning process that is generally afforded to government agencies and tribal partners. This status is granted because a government agency is assumed to possess special expertise in the subject matter of the plan and the relationships to coordinate the agency response with other coordinating stakeholders. By choosing to pander to the dogmatic purist positions of a narrow group of special interests, the County has intentionally alienated itself from the State of Utah. The state is represented in the travel planning process by the Public Land Policy Coordinating Office (PLPCO), and PLPCO is also a coordinating agency on the plan. The professionals at PLPCO have extensive experience participating in travel planning throughout the state, and are acutely aware of the interests of the State when it comes to travel planning. If Grand County had coordinated its feedback with PLPCO they would have increased their credibility, but they would have had to moderate their position to balance the county’s interest with the interest of the State. Instead, Grand County chose to adopt the most extreme position possible, and the BLM will likely be forced recognize this and consider Grand County’s comment with the same weight that they would a form comment from SUWA.

While the leaders of Grand County have convinced themselves that someone on a raft in the Green River has some special right to float down a river without having to see a vehicle, we can expect the State of Utah to recognize that the off-road trail system of the Labyrinth Rims/Gemini Bridges Area is a national treasure that is economically significant to Utah. Utah is just as likely to request significant closures in this area as they are likely to recommend shuttering the ski resorts of the Wasatch Front.

Utah State Code 72-3-103.3 and Utah State Code 72-3-105.3 indicate that for Class B and Class D roads, the state and the county have joint undivided interest in the title to all rights-of-way for all county roads. Grand County is nothing more than a subdivision of the State of Utah. They do not have any special status of sovereignty, and the interests of Grand County are subordinate to the interests of the State. The State of Utah has a joint and undivided interest in the roads Grand County is recommending for closure, and if they don’t have the support of the State in their request, then their request means nothing. Furthermore, even if the County were to go through the legal process for abandoning a road in its jurisdiction, the jurisdiction of the right-of-way would revert to the State. The state would also have to abandon the right-of-way through a process separate from the county process. The point is there are processes defined by statute by which the county and State work together to determine road closures. Grand County is marginalizing its relevance by recommending road closures of State right-of-ways through a travel management comment.

We are confident the State of Utah will be more responsible in defending the transportation infrastructure of the state and the significant investments the State has made in cultivating a thriving recreation economy in Grand County.

State Code 41-22-1 makes it clear that it is the official policy of the State of Utah to develop trails and other facilities for the use of off-highway vehicles. Utah is currently involved in a multi-year legal process to lay claim to thousands of miles of R.S. 2477 routes. Many of the routes proposed for closure provide access to State Institutional Trust Lands. If the BLM closes the routes recommended for closure – many of which are R.S. 2477 routes – the State will likely have no other choice but to defend its interests and appeal the decision.

Grand County recommended that some trails be open to full-size vehicles and not UTVs or dirt bikes. Again, this is contrary to state law. Utah State Code 41-22-10.5.2 states, “A municipality or county may not prohibit or restrict the use of a street-legal all-terrain vehicle on a street or highway where the use of another street-legal vehicle is permitted.” We know Grand County knows this because we have been directly involved with their leaders in their effort to try to undermine these powerful state protections for motorized users of Utah’s roads.

Grand County is currently accepting public feedback for a public land bill that they would like to see passed through Congress. They want to create five National Conservation Areas, which will likely be mostly restrictive wilderness. In order to get any traction for this proposal they will need to get support from Utah’s federal delegation. By adopting this letter and positioning themselves in direct contradiction with the State of Utah, they have sent the signal loud and clear that they are not a group of serious policy-makers. We invite you to send a comment to Grand County and to federal legislators using the action alert below to emphasize to these elected officials that Grand County’s public land proposal shouldn’t be taken seriously.

We will continue to monitor the progress of the BLM travel planning processes in Utah as part of our 10,000+ Project. This effort will impact roads and trails around Moab and 13 total travel areas throughout the state. We are aggressively engaged in protecting access in every one of these areas.

We are finding that in order to go the full distance in these fights, we will have to go into each one of them expecting the possibility of litigation. Fortunately the process is unfolding slowly enough that we have time to build a small army of donors to help us build a war chest for a legal fund specially dedicated to these fights. We know that everyone reading this can afford $5 a month to help us in these fights. We are dedicating a high level of strategy and commitment to these fights, and we are grateful for everyone who is investing in us to get this job done!