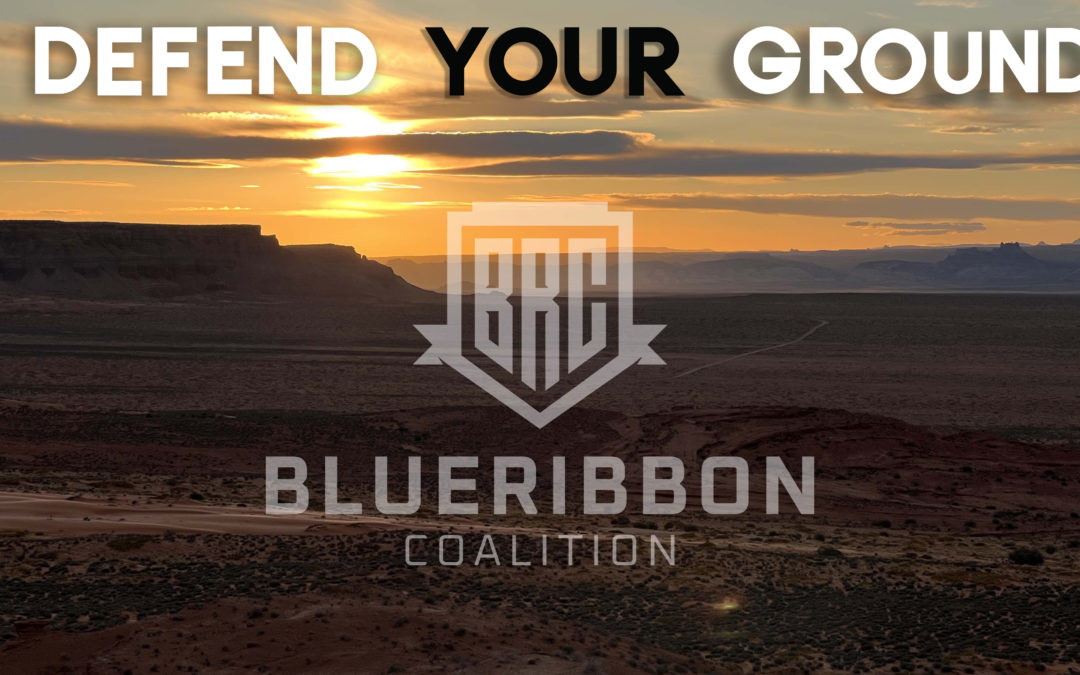 Last week BlueRibbon Coalition filed an appeal of a decision by the Bureau of Land Management’s Price Field Office to close 35 miles of routes in the San Rafael Desert in Utah. We have serious concerns about the process BLM used to close these roads, and their reasoning was even worse.

As a case in point, the picture below shows two routes in the San Rafael Desert:

This source of this photo is the BLM’s own field work that was used to justify the 35 miles of closures. This picture shows two routes as they commonly appear in the San Rafael Desert. It is worth noting that this area receives light use, and most of the less-used routes are two track routes through sand, brush, and rock. Part of the reason the area receives light use is because ten years of litigation efforts from anti-access groups created uncertainty around which routes are open and which are closed.

In the picture above the BLM decided to close one route because it had “fully reclaimed” and “was no longer visible on the ground.” For the record, the route that was closed is the one on the right that has at least two sets of recent tire tracks on the route. There are no signs to tell you which route is open and which is closed. All of the main trail apps show both routes. Because of this arbitrary closure if you chose the wrong route while out riding in this area, you would be subject to fines and potentially jail time.

I went to the area to ground-truth other routes that were closed through this emergency, temporary closure. Because it is currently illegal to use the routes, I had to walk the routes to check the validity of the BLM’s field work.

Here is another example of a route that BLM says is “fully reclaimed” and is “no longer apparent on the ground” and wasn’t receiving use despite evidence of old tire tracks on the route:

Hopefully it’s clear to you by now that there’s more going on here than meets the eye.

We just analyzed these routes in a travel planning process that was decided in the Fall of 2020.

Anti-access groups didn’t like the fact the BLM designated more routes as open than what was previously recognized. They challenged the BLM’s decision in court and BRC and our allies intervened.

There are a few things that are important to understand with this category of categorical exclusion. The first is that it is only for temporary closures. The second is that it must be triggered by OHV use causing considerable damage to an environment. If a route is closed because of the fear of potential damage to an area, BLM should have to have evidence that the future damage is reasonably foreseeable.

In the case of the San Rafael Desert, the BLM is claiming the closures won’t end until the risk of considerable OHV damage to the area no longer exists. This is a condition that is already being met, since considerable OHV damage isn’t occurring in the area, and allowing the minimal impacts of OHV use on OHV routes is the entire reason we all spent years participating in the process to develop the travel plan for this area.

BLM would claim that in areas where the routes aren’t visible on the ground, OHV’s could leave the route and damage the surrounding area. In my experience in the area, the routes were clearly defined enough that this risk is minimal. Furthermore, instead of spending hours of time doing fieldwork to try to close the routes, the BLM could have been using staff time to place signs on the open routes to prevent OHV users from traveling off the routes. Volunteer groups in the area offered to do this with the BLM.

These closures are unjustified, and the BLM’s decision to close them was arbitrary, capricious, and an inappropriate use of a categorical exclusion. We are challenging this decision through an administrative appeal, as part of our 10,000+ Project.

On the day after the 30 day window to appeal this decision was past, BLM also announced that they had cut a backroom settlement deal with the anti-access groups, which would require BLM and the public to review a total of almost 200 more miles of routes in the area. It became clear in this moment that this temporary closure was an unofficial part of this settlement. As defendant intervenors, we joined the state of Utah, Ride with Respect, and Colorado TPA to oppose this settlement agreement. The judge in the case decided to let the settlement move forward.

So we still have work to do in the San Rafael Desert. We will update you when we hear back on our appeal of the temporary closures. We will also need everyone’s help to ground truth the almost 200 miles of trails that BLM is required to review in the settlement with the anti-access groups.

We know these explanations take time, and the administrative process is made intentionally complicated, so that the general public will just give up and stop paying attention to what is going on behind the scenes and behind closed doors. We take our work to inform you about what is going on very seriously, and we will continue to fight for every mile of these routes every step of the way.

If you care about keeping these areas open, we invite you to become a subscribing member of the 10,000+ Project.