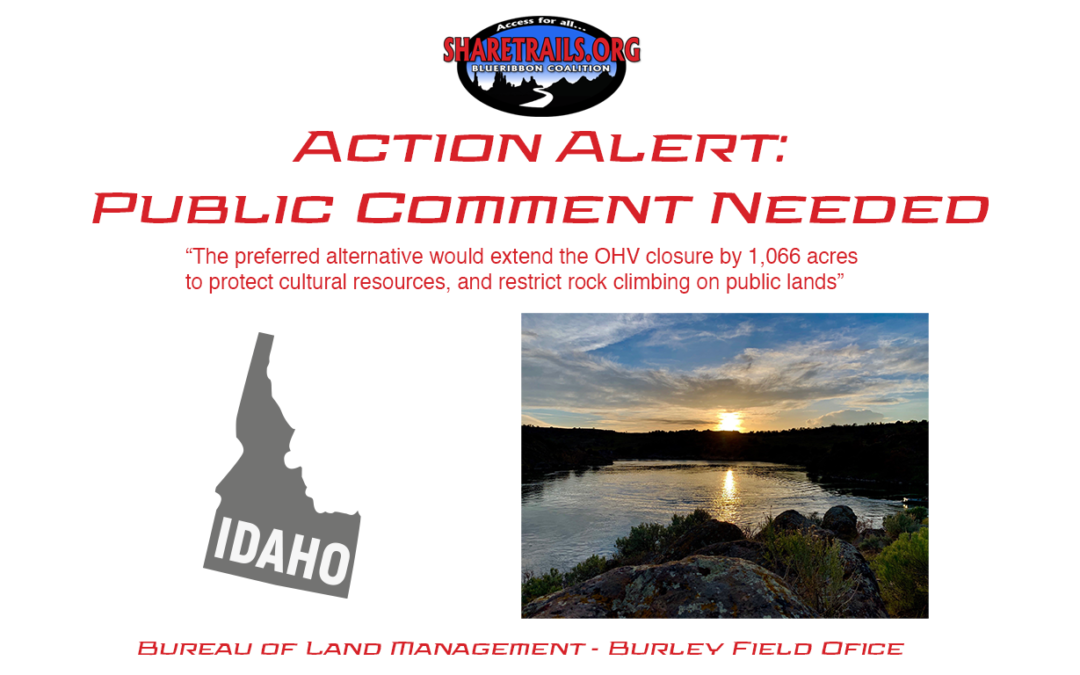 In 2011, BlueRibbon Coalition participated in the scoping process for the Cedar Field Amendment for what is now the Resource Management Plan for the Burley Field Office in Idaho. This will affect an area popularly know as Massacre Rocks near American Falls, Idaho. It is a popular destination for motorized recreation, and it is one of Idaho’s most popular areas for sport rock climbing. The area also contains many cultural resource sites, and the basic purpose of the plan is to address recreation impacts to cultural resources.

Prior to the planning effort that occurred in 2011, we had already seen thousands of acres closed to motorized recreation, and rock climbing was rising in popularity. In 2011, numerous suggestions were made by motorized recreation groups and rock climbing groups to identify additional ways to mitigate any damage to cultural sites. The fact that BLM hasn’t moved on this since 2011 also shows why it’s important to support organizations like BlueRibbon Coalition who commit to these long term fights, which we can only do with a strong and stable membership base.

The current proposal makes it clear that the BLM’s preferred outcome is to consider the entire landscape to be a cultural site, which is contrary to the statutes, regulations, and executive orders that govern how cultural site protection should be managed. Recreation users groups have consistently suggested that BLM needs to manages these sites with a site-specific approach that focuses on concentrating education and enforcement resources to the individual sites. If they proceed with recognizing the entire landscape as a cultural site it will result in the closure of the entire area to motorized recreation. This decision would also close around 500 of the nearly 700 rock climbing routes in the area. The only routes left open would be on land not managed by the BLM. In other words, all BLM rock climbing routes would be closed.

Here is a link to the BLM planning page: https://eplanning.blm.gov/eplanning-ui/project/36660/570

We are asking for your help to share your feedback to the BLM to tell them to support the reasonable alternatives that will still allow for recreation use while also protecting cultural resources. You can easily submit a comment by using our action alert form below before November 10, 2021. We encourage you to the use the feature that allows you to customize the comment – especially if you have experience recreating in this area and can provide specific feedback on this proposal.